USTC Has Launched a Joint Research Institute in Intelligent Computation and Its Applications with the University of Birmingham
The Guest Professorship Award Ceremony for Professor Nigel Weatherill from the University of Birmingham (UoB) and the Opening Ceremony of The Joint USTC-Birmingham Research Institute in Intelligent Computation and Its Applications were held on October 21, 2010, in USTC. A number of senior members of both USTC and UoB attended the two ceremonies, including President Jianguo Hou, Vice President Chusheng Chen, Professor Huaping Chen( Executive Dean of School of Computer Science and Technology of USTC),and Pro-Vice-Chancellors of UoB, Professors Nigel Weatherill and Malcolm Press, as well as Professors Xinhua Wu and Xin Yao from UoB. The ceremony was hosted by Vice-President Chusheng Chen. 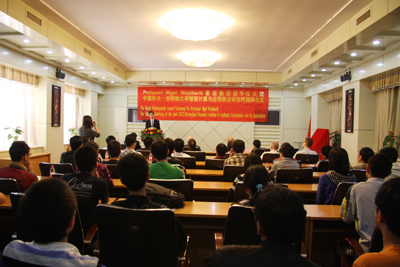 After Prof. Xin Yao from UoB, who is also an alumnus of USTC, introduced Professor Nigel Weatherill’s career achievements, USTC President Jianguo Hou awarded the Guest Professorship Certificate to Prof. Nigel Weatherill for his achievements in research and efforts for the collaboration between UoB and USTC. Then, Prof. Weatherill acknowledged the special honor from USTC, the first-class university in China, even around the world, and hope to push more collaborations between the two universities. 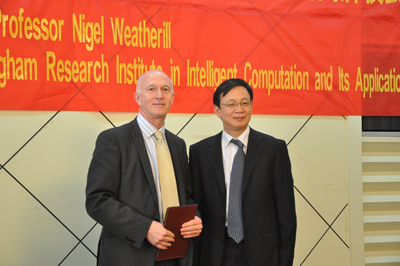 After the Guest Professorship Award Ceremony, Vice-President Chen continued to chair the Opening Ceremony of the Joint USTC-Birmingham Research Institute in Intelligent Computation and Its Applications. Prof. Chen announced that USTC had launched a number of plans to support the establishment of the joint research institute, including providing all the physical infrastructure of the institute, such as lab and office spaces, refurbishment costs and all computing and office equipments, allocating additional laboratory space to the institute in the new Science and Technology Building, and ring-fencing research funds to support USTC in carrying out collaborative research with their Birmingham counterparts. He also emphasized that just the establishment of the institute is very excited about the strategic partnership between USTC and UoB, and USTC is also committed to broaden our research collaborations to other areas if this initial trial is a success. 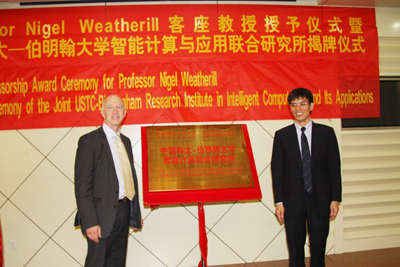 After that, Prof. Nigel Weatherill announced the corresponding schemes established by UoB for the institute. Profs. Xin Yao and Huaping Chen, as the representative of Dean of School of Computer Science at UoB and the executive Dean of School of Computer Science and Technology at USTC, congratulated to the opening of the institute, respectively. The opening ceremony closed after Vice-Presidents Chen and Weatherill revealed the plague of the institute.

(News Center of USTC. Supplied by School of Computer Science and Technology at USTC)
22.jpg