A research group of School of the Computer Science and Technology (SCST)received a Best Paper Award at the ACM International Joint Conference on Pervasive and Ubiquitous Computing (UbiComp 2016), which was held in Heidelberg, Germany from Sep. 12-16.The award paper, " WiFinger: talk to your smart devices with finger-grained gesture " is authored by Hong Li, Wei Yanget al..All authors are from the SCST of USTC, which is the only affiliation of this award-winning paper. Dr. Wei Yang, who is the corresponding author of the paper, works as an associate professorin Prof. Liusheng Huang’s group. AndMr. Hong Li is a master student under Dr. Yang's supervision. 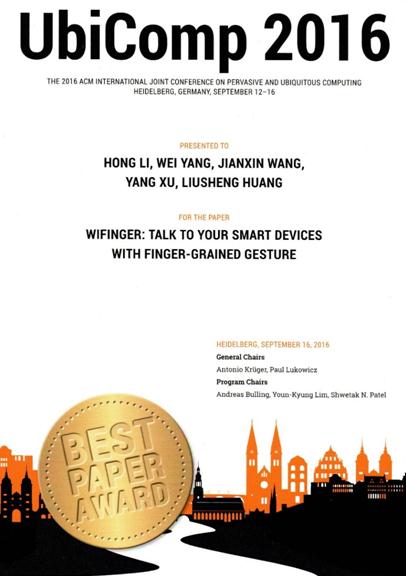 Wireless signals can not only be used for delivering data, but also can be used for sensing the environment. For example, in the indoor environment, the radio signals emitted by a transmitter will transmit through a variety of paths such as reflection and scattering, and form superposed signals in the receiver. Human actions (such as walking, running, breathing and gestures) will affect the propagation of Wi-Fi signals under wireless environment. Yang et al. propose to collect channel state information (CSI) from the physical layer, and use the fine-grained CSI (including signal amplitude and phase information on CSI subcarriers) to identify the subtle gestures performed by human. As a result it enables Human-Computer Interaction using wireless signals. The solution presented in the paper does not require additional hardware devices (such as cameras), also it needs no wearable sensors wore by users. It extracts CSI by modifying the NIC driver and identifies the human gestures using the extracted CSI. The solution achieves recognition accuracy over 90% towards digital 1 to 9 in American Sign Language (ASL), and its average accuracy for single individual number text input reaches 82.67% within 90 digits for 10 different users. The authors plan to upgrade their scheme to recognize all ASL in the future work.

UbiComp is a flagship conference in the area of ubiquitous and pervasive computing, also it is listed as a Rank A conference by the CCF (China Computer Federation).It provides a premier interdisciplinary venue in which leading international researchers, designers, developers, and practitioners in the field present and discuss novel results in all aspects of ubiquitous and pervasive computing.The UbiComp 2016 was organized by the ACM, and there will be the selection for "Best Paper Award" in each UbiComp conference. The submitted papers are judged on originality, significance, correctness, and clarity for the award. Only top 1% papers received the "Best Paper Award" in UbiComp. Previous best paper awards were all won byforeign research institutes, among which someworld-famous universities such as Cambridge University, Carnegie Mellon University and University of Washington are shoo-ins. This year,USTC as the unique affiliation of Yang et al.’s paper, it is the first time the ACM UbiComp Best Paper Award has been awarded to China research instituteexclusively.

In the view ofthe number of accepted papers of ACM UbiComp (only counting the first affiliations), China for the first time in history, is first runner-up, and far outperforms the second runner-up, Japan. Also, China excels USA (the champion)in theacceptance rate of papers.Moreover, the SCST of USTC has 4 regular papers published in the proceedings of UbiComp 2016, which is second-most research institutebehindPeking University (5 papers).