On October 18th, the annual HPC Seminar, hosted by the HPC Advisory Council,  was held in Hefei. At the seminar, the HPC Advisory Council officially announced  the results of the 5th Student RDMA Programming Competition (Hereafter be  referred to as the competition or the RDMA competition). The SwanGeese team  (超算鸿雁队) from University of Science and Technology of China (hereafter be  referred to as USTC) and another team from Shanghai Jiao Tong University stood  out from more than 60 teams, both of which won the First Prize. And the team  from the National University of Defense Technology won the first Special Award  in the history of this competition. 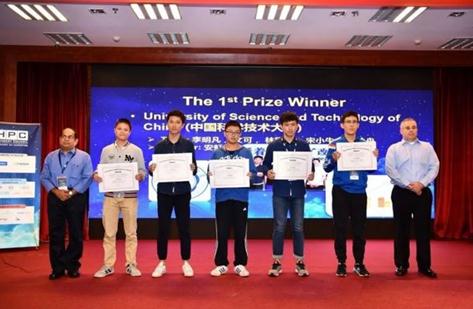 Five years after the first competition, the influence of it has  spread further and further, attracting more than 60 teams from colleges all over  the world, drawing attention from many world-top experts on High Performance  Computing, Cloud Computing and Big Data, and becoming a hot topic to the media.

With the rapid development of artificial intelligence, the focus of  industry turns to boosting AI with High Performance Computing. In the AI era,  RDMA (Remote Direct Memory Access) is the most efficient networking protocol to  break the bottleneck of data transmission. Whether for the traditional  high-performance computing applications or for the emerging Deep Learning  frameworks, RDMA acts as one of key technologies. As thus, the topic of this  year catches up with the latest development of the world's super-computer  industry, focusing not only on the theoretical framework and the practical  model, but also on the trend in development of artificial intelligence and deep  learning, which advocates the idea of combining the competition and concrete  applications.

This competition has become an important platform from  which the RDMA related professionals are trained and elected. At the seminar,  architects from Alibaba, Jingdong, IFLYTEK, SenseTime, Face++, etc. participated  in the discussion on RDMA and AI, and showed eagerness for RDMA professionals.  The competition has received strong support from a number of well-known  institutions at home and abroad, including the San Diego Supercomputer Center,  the Argonne National Laboratory, CCF TCHPC, ChinaGrid, etc. The judges are  composed of senior experts abroad and professionals from leading Deep Learning  industries including: Alibaba, Jingdong, IFLYTEK, SenseTime, Face++, Mellanox  and NVIDIA. Gilad Shainer, the HPC Advisory Council Chairman, was also the  chairman of the judging committee.

Since the first one, the SwanGeese  team of USTC has participated every year, and have won three First Prizes and  two Second Prizes. Each year the SwanGeese team mainly consisted of grade-2 and  grade-3 bachelor students, along with 1 or 2 novice master students. In the  competition, the members improve their research capabilities, the understanding  and the mastery of new technologies. The team for this year consists of two  novice master students: Li Mingfan and Wen Ke, and three bachelor students of  grade-3: Lin Zhiqi, Chen Yongzhou and Song Xiaoniu. The team is instructed by  Prof. An Hong from the School of Compute Science and Technology. Those five  students was striving the whole summer vacation, studying from the ABC of RDMA  technology to the migration onto MXNet. They made continuous breakthroughs in  porting and optimizing RDMA on MXNet, and finally improved the performance of  the networking module by nearly 22 times, thus indirectly improved the  performance of the whole system by 5 and 9 times against two test cases. The  RDMA Programming Competition provides a platform for students to communicate  with each other, giving them the opportunity to catch up the latest of  technology and to compete share with teams from top universities around the  world, and to develop insight and innovation.