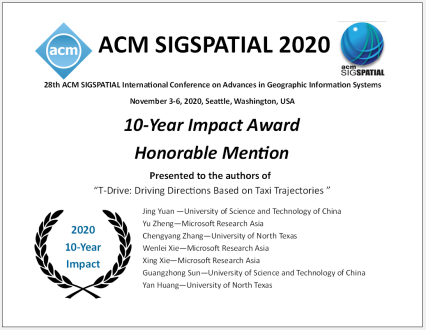 The “10-year Impact Award” was awarded to the paper, “T-Drive: Driving Directions Based on Taxi Trajectories” by researchers from University of Sciences and Technology China (USTC) and other collaborators in the 28th ACM SIGSPATIAL International Conference on Advances in Geographic Information Systems (GIS) 2020 (https://sigspatial2020.sigspatial.org/).

The first author, Dr. YUAN Jing, who obtained his bachelor and doctoral degrees in University of Sciences and Technology China (USTC), and his cooperators were awarded by the only Honorable Mention for their achievement in Artificial Intelligence (AI) Planning of urban GIS. This is the first time that a Chinese higher-level institution, as alma mater of the main contributor to the achievement, has ever been awarded for this honor.

Started in 1993, ACM SIGSPATIAL, an annual event of ACM specially interested in spatial information, aims to bring together researchers, developers, users and participators in relation to novel systems based on geospatial data and knowledge, and fostering interdisciplinary discussions and researches in all aspects of urban, spatial and GIS.

It was the second year in his PhD, Dr. YUAN, who is currently the vice president of Huawei AI Cloud department, published this work. In this article, authors proposed a “Cloud-Mobile Service” method that analyzed the historical GPS trajectories over 33,000 taxis, and used these for planning smart driving directions. This approach has shown its superiority by demonstrating that the 60%-70% of recommended routes are faster than routes suggested by commercial navigation software at the time. They concluded: “50% of our routes are at least 20% faster than the competing approaches.”

In the decade since the article has been published, the method YUAN et al. proposed has been applied all over the industry, especially in time-spatial smart data analysis and smart city. The article has been cited by academic peers, including Chinese Academy of Sciences (CAS) and ACM/IEEE Fellow, for more than 940 times. 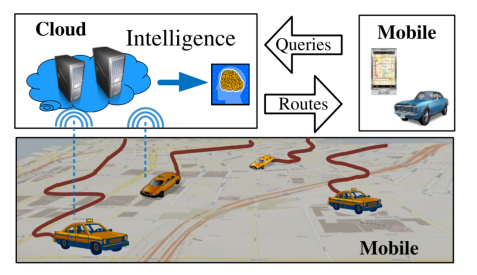